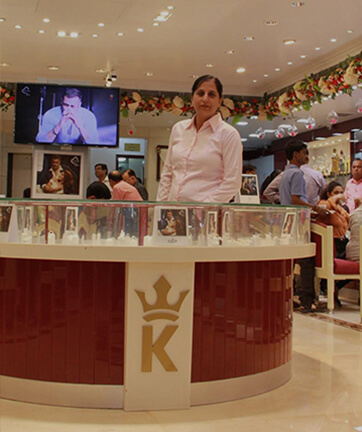 House of Kashi has been known for its design, quality of workmanship and innovation. We take pride in manufacturing 100% of all diamond jewellery in our state-of-the-art factories in Kanpur and Kolkata. Thanks to our in house design teams and manufacturing units, we are able to attain a very high quality of craftsmanship that is amongst the best in the world. From our base in Kanpur that is home to its flagship jewellery and watch store, Kashi Jewellers has a growing customer base stretching from Kanpur to Mumbai and Dallas to London. One of the first Indian Jewellers to begin Exporting Internationally back in 1979, it currently has retail clients in the UK, the United States of America, South Africa and UAE. Today, Kashi Jewellers is the preferred brand amongst women of leading business and Industrialist houses in India and overseas.

i.) Rolls Royce has selected Kashi Jewellers exclusively to be featured in the Rolls Royce Yearbook in 2013 and to be a part of their 115th anniversary at London, UK.

ii.) Kashi Jewellers is the only jeweler in India to have been awarded President of India National Award (MSME), 2nd year in a row for Excellence in Manufacturing & Entrepreneurship.

ii.) The 'Oscar of Jewellery Industry', JNA Awards, HongKong has honored Kashi Jewellers in 2012 for '3 Decades of Excellence' and will be honoring in year 2013 for 'Outstanding Enterprise of the year-India'.

Your message was sent successfully.